The Boaboa have the basic shape of a Grimalkyne, but exhibit much thicker, white fur and a bulkier frame. They wear crude imitations of Popo heads as masks, with the tusk's tips painted in colours that correspond to the status ailment each individual Boaboa uses in combat.

The Boaboa are capable of using many different status ailments to damage their foes. They feed on Popo, but also show reverence to the creatures, dressing up to look like them and travelling with the herds through the Hoarfrost Reach. Young Boaboa can undergo a sort of rite of passage where they hunt a Beotodus. If they survive, they are seen as heroes in the tribe.

Armor and Weapons related to the Boaboa Monster. 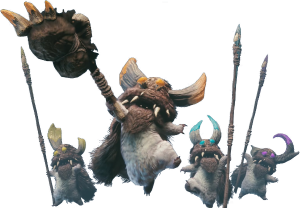