How to get Coral Orchestra

This Palico Gadget is obtained by completing the Grimalkyne tribes sidequest in Coral Highlands. When obtained, it has to be equipped by the Palico in order to use it. Your Palico's efficiency with the gadget will start at level 1 and using the item during hunts will increases its proficiency, up to the maximum level of 10.

The Coral Orchestra provides your Palico the ability to play 2 two musical instruments, the Coral Cheerhorn and the Choral Cheerbongo.  Importantly, the Palico starts out with only the Choral Cheerhorn and will be unable to play the Cheerbongo until he has obtained a gadget proficiency level of 5. Your palico will automatically start playing an instrument at the start of combat and then, on average, every 20-45 seconds of in combat time (tested at a proficiency of level 10). The choice of the played instrument at each session is random. Playing an instrument takes about 5-10 seconds for your Palico, with the Horn being played faster.

A Palico playing the Coral Cheerhorn 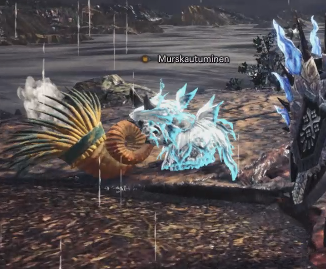 A Palico playing the Coral Cheerbongo 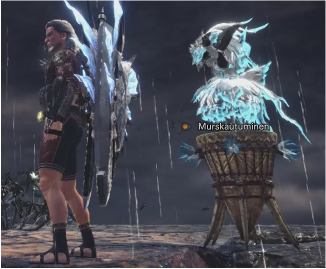 Playing either instrument will grant the Hunter and the Palico a short-duration buff. These buffs typically last between 90 to 180 seconds, depending on the effect. The buff effect is chosen randomly, although the Palico avoids playing for buffs that are already in effect. Additionally, both the Coral Cheerhorn and the Cheerbongo have their own set of unique buffs. This leads to the possibility that at a given time during combat, the Hunter and his Palico might have 6-7 active Coral Orchestra buffs. Although the availability of certain effects and the strength of each effect might depend on the Palico's gadget profiency level, here is a list of all effects characterized so far at a gadget proficiency level of 10.