Grimalkyne is a Small Monster in Monster Hunter World (MHW). テトルー in Japanese.

Once the upper area of the Ancient Forest is unlocked (Camp 17) enter the Ancient Forest in Expedition mode and find doodles around the map made by the Bugtrappers. Once enough doodles have been collected open your map and find a tailrider icon with a description of ???. Mark it and follow your scout flies to it where you'll find a lone Bugtrapper that will run. Chase it back to its camp (near Camp 17). Once you arrive at its camp your Palico will talk to it and befriend it asking to join the Bugtrappers.

Start this quest by finding doodles, just like the Forest find enough till you can track them on your map. Follow your scout flies to an area near (Camp 15), there you'll find a  lone Protector worried about his friends after they got separated by a Barroth. He'll ask you to find them and capture them with your capture net. Your Palico will then mark their locations on your map. Go to each and attempt to capture them ( Ghillie Mantle has no effect on them meaning they will still run if you approach with your Ghillie Mantle equipped? [Unverified] ), they will be scanning the area so approach when they aren't looking and capture them. Once all three have been captured, return to the first Protector and he'll befriend you.

Begin this sub-quest like the other two. Find the Troupers in Area 10, they will be riding Shamos and attack, defeat them and they will run, follow them to their hideout where they will explain they were planning on hunting two Tzitzi-Ya-Ku's that have been causing trouble. Your Palico will offer to help and you'll receive an Optional Quest to complete which involves defeating two Tzitzi-Ya-Ku's. (You do not have to wait for a Lynian Researcher to be present in the area.)

To start this quest the sub-area of the Vale must be unlocked, and be on a Solo Expedition. Find a Plunderer in Area 13, it only appears after the Odogaron has dragged over the Legian corpse from Area 9. Then chase it with scout flies to the dead end in Area 15. Put out Raw Meat when told to by your Palico. After a few moments multiple Plunderers will come to eat the meat. You will get the usual cut scene before they join you. (You do not have to wait for a Lynian Researcher to be present in the area.)

To start this quest you must have befriended all the other Grymalkynes. Speak to the Lynian Researcher in Astera by the Ecological Research area. This will give you a new Critical Bounty called Gajalaka Exchange: Gajalaka Linguistics in which you must find 10 Gajalaka Tracks. These appear as Gajalaka Doodles and only in high rank zones. Each locale (Not necessarily each zone) has at least 2 doodles, some may have more. Doodles appear relatively close to where Gajalaka spawn (filter your map by "small monsters" to locate them). Doodles do not respawn, not even if you go back to Astera and return.

After you turn in the Bounty you must speak with the Lynian Researcher again to get Gajalaka Exchange: Gajalaka Linguistics II. Equip your Ghillie Mantle to make this one easier then return to the Elder's Recess AT NIGHT. You can wait for night, or simply go into your tent within one of your camps (where you can change Palico and your own gear and heal up, your character literally drinks tea there) to trigger the change. When you arrive the Lynian Researcher will be at the entrance of the Gajalaka Camp. From there sneak into the camp without being seen. The Ghillie Mantle will make you invisible. When you get close enough to the fire without being noticed the camera will zoom in on a hole in the wall, interact with the hole without being seen to complete the quest. (Note: "Wild" Gajalaka will remain hostile in all zones, ally Gajalaka will be marked with green indicators like other tailraiders.)

After the completing the third Iceborne quest, Ready to Strike, the Linean Researcher will appear in Hoarfrost Reach near campsite 1. Speak to him and he'll tell you that in order to gain the Boaboa's favor, you must impress them. To do so, you must successfully hunt a large monster in front of the Boaboa scouts, to which they will aid you.  Next, your Palico will tell you that the Boaboa wish to speak with you.  Travel down the path away from campsite 1, just until you crawl under the large branch.  A group of Boaboa will ask you to meet them at their lair.  Head to area 2 and take the wingdrake.  Climb up the waterfall rocks and through the corridor at the northeast corner to their lair.  Speak to the Boaboa within the lair, they will offer you the quest By Our Powers Combined.  Accept the quest and hunt the tempered Beotodus. 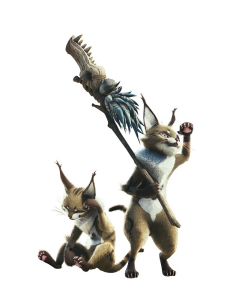