Controls in Monster Hunter World (MHW) refers to the input mechanisms to control the game on PS4, Xbox One and PC. Below, we outline control guidelines for each platform 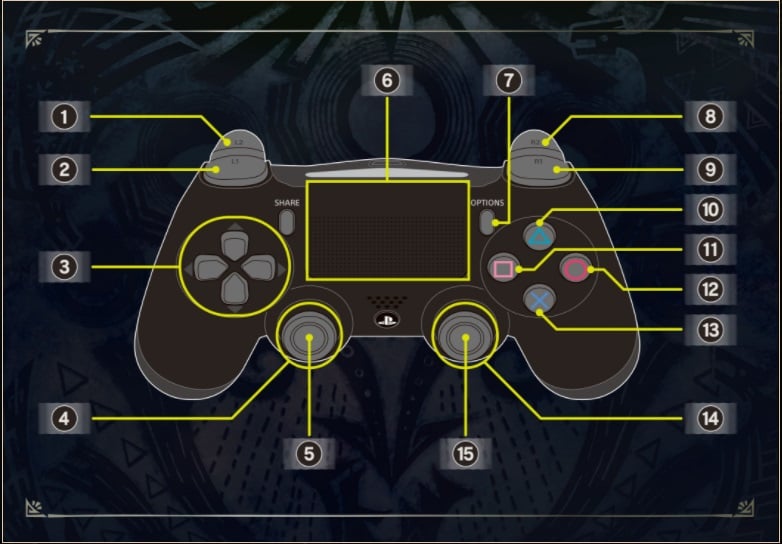 Controls in the Field

Hitting a large monster with a jumping attack gives you a chance to mount it. Once mounted, you can attack it for as long as you stay held on.

When you're mounted, the border around your minimap will light up with different colors to indicate what actions the monster will do in its attempt to knock you off. Watch its movements and your minimap carefully to know when it's safe to attack.

You will slowly lose stamina as you continue to ride a monster. You'll be thrown off the monster if your stamina runs out, so keep an eye on your stamina gauge!

Once you've mounted a monster, you can attack it with

. Keep attacking, and eventually you'll have the chance to unleash a powerful finisher.

The minimap will visibly glow white to indicate that you can use a finisher.

Brace Against the Monster's Attempts to Throw You

to brace yourself against a monster's attempt to throw you off.

The minimap will glow red to indicate that the monster will try to throw you off.

Sometimes a monster will slam against a wall or other object to throw you off. Evade this by changing your position with

The minimap will glow red and the camera will zoom in on your character to indicate that the monster will attempt a body slam.

You can signal your Palico to use the Palico Gadget it has equipped. Each signal command can be used from the item bar, and can be used any number of times. However, each tool has a cooldown, meaning that once it's used it cannot be used again for a short time.

When it's just you and your Palico out on a quest together, your Palico may sometimes recruit other creatures to help you as "Tailraiders"! Your Palico will speak with certain small monsters or Grimalkynes of tribes you've befriended, and they'll join as Tailraiders to aid you in battle.

You can see creatures that can be recruited as Tailraiders on your wildlife map.

You cannot recruit Tailraiders when your Palico is on standby.

Grimalkynes are Lynians that live in the New World, and are similar to Felynes in appearance. They have a unique tribe in every region, and once befriended they can be recruited as Tailraiders.

Your Palico can try to convince certain monsters to help you on your hunts. If an attempt is successful, the monster will accompany you for a short time.

on keyboard to use your custom shortcuts:

Switching menus allows you to use the specific Right Stick shortcuts registered to each menu.