The Slinger is a fixed Weapon in Monster Hunter World (MHW). It resembles a slingshot and can fling projectiles like stones.

The Slinger is part of the standard gear for Hunters of the Research Commission. They resemble small crossbows attached to the left arm, and can shoot stones, knives, ropes, and Capture Nets. In addition, the Slinger is used by Hunters to grapple across gaps and access higher or lower levels.

With Iceborne Expansion, The Slinger can now be used while a Weapon is drawn, regardless of weapon type. In addition, the Slinger has been given new functionality during hunts with the Clutch Claw.

The Slinger is a multipurpose support tool that serves all kinds of uses out on a hunt. You can load Stones and Pods found out in the field into it to fire as projectiles, and even use it as a grappling hook in certain situations.

With a Weapon sheathed, the Slinger is activated with

/ C, and ammunition is fired with

/ C, aim the reticle at the Wedge Beetle and press

Capture Net can be used to catch Endemic Life creatures and keep them as pets. The Capture Net is a tool that is locked into the Item Bar, from which is must be loaded before it can be used.

Beyond these, the Slinger has many more uses, such as distracting and damaging Monsters, triggering Hazards, mobility and assisting teammates.

With the release of the Iceborne Expansion, the Slinger can be used by some Weapons to fire Slinger Bursts in the middle of a combo. Doing this with Scatternuts, Crystalburst, Thorn Pods, Piercing Pods, or Bomb Pods allows a hunter to briefly stagger a Monster and buy them a brief window to finish a combo attack.

The Gunlance also has a unique use for the Slinger, allowing a hunter to load Slinger Ammo into its Wyrmstake charge. While this modified Wyrmstake is stuck to a Monster, shells from the Gunlance will cause it to give off an extra explosion. 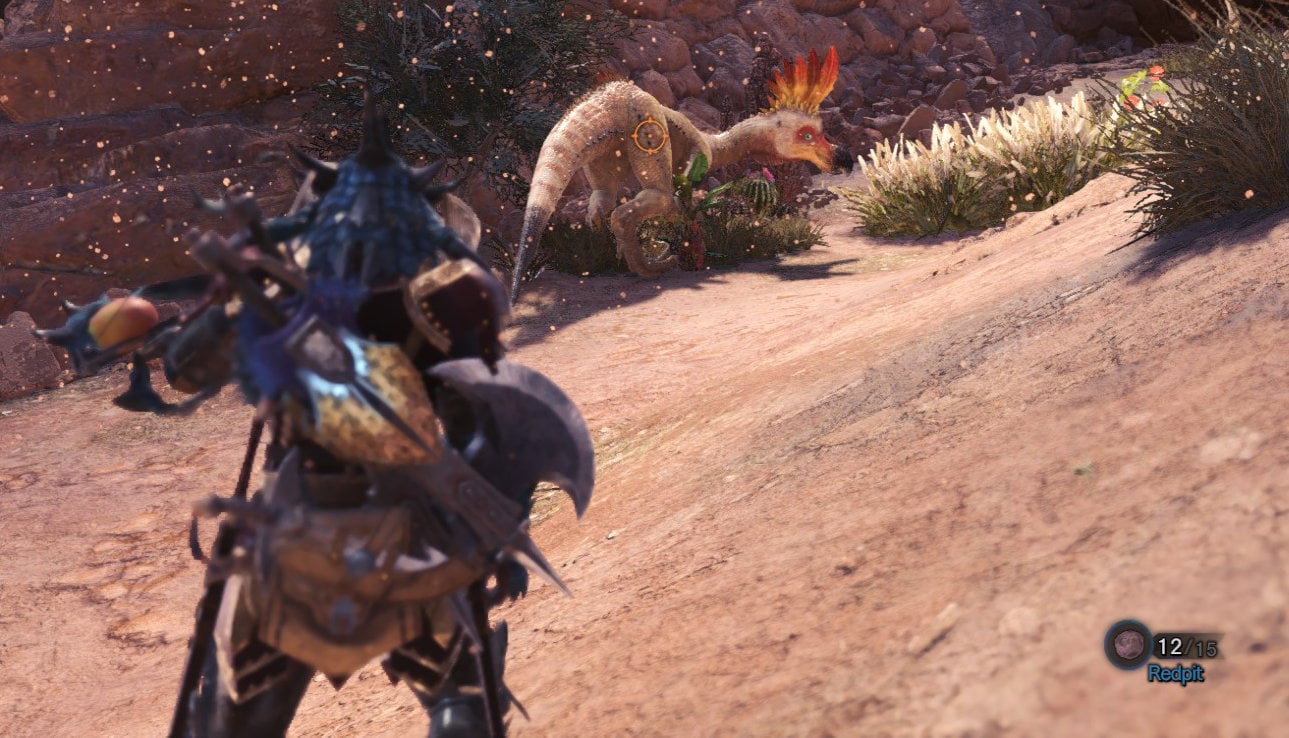 Using the Slinger to distract a Monster 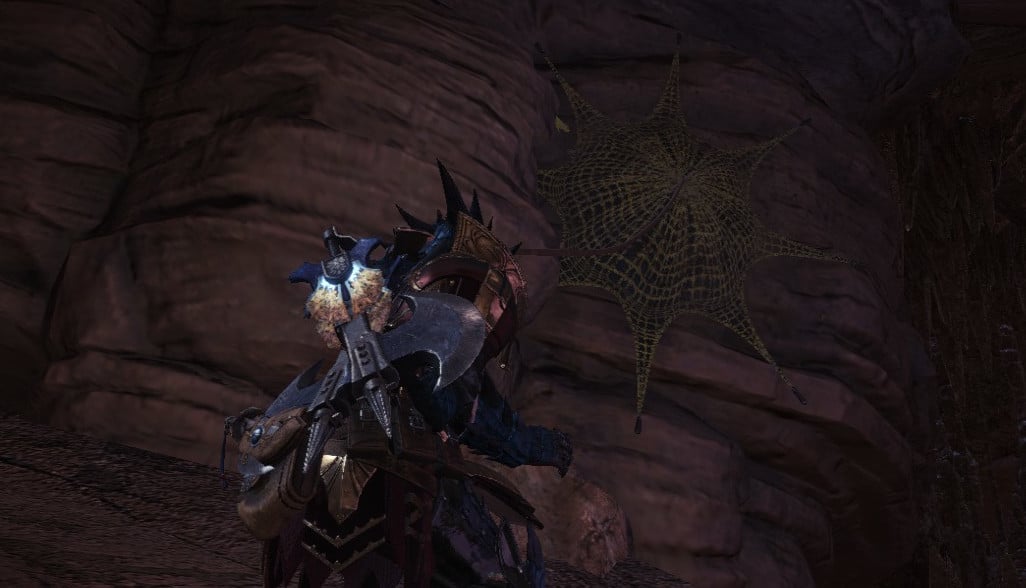 The Slinger is able to fire many different things as ammunition, each with its own effect. Only a few ammunition Items can be brought to the field by a Hunter: Flash Pods, Dung Pods, Screamer Pods, and the Capture Net. Beyond these, ammunition for the Slinger must be scavenged from the Environment and Monsters, or found in the Supply Box on some Quests. Some Slinger ammunition is specific to certain Locales and Monsters. Picking up one type of ammunition from the field will discard the one currently held.

Many types of ammunition can stagger Monsters or cause small amounts of Stun buildup when striking a Monster's head.

Stones can also be used to awaken Hunters who are stunned, knock down Vespoids and Hornetaurs without destroying the body, and cause minor Stun Damage when striking the head of Monsters.
Source: Stone Piles found in all Locales.
Capacity: 20-35-45

"Brightmoss can be equipped as Slinger ammo and fired at walls or other objects to illuminate the area. You can also shoot it at the heads of flying wyverns to make them fall out of the air."

Brightmoss can also be used to mark the location of Monsters that move underwater, such as the Jyuratodus.
Source: Brightmoss Clumps often found in caves of the Ancient Forest, Wildspire Waste, and Elder's Recess. Found commonly in the Coral Highlands.
Capacity: 5-8-12

"When they hit something, they break apart, emitting a loud noise and small shockwaves that can stun Monsters."

Scatternut can be used to stagger or Stun a Monster, useful against fleeing Monsters to provoke them to reengage. Repeated use causes immunity to the stagger effect for a short time.
Source: Hanging on vines, branches, or coral in the Ancient Forest, Wildspire Waste, and Coral Highlands. Also found in piles in the Rotten Vale.
Capacity: 5-6-7

"Slinger Torch ammo bursts into flame when it lands, repelling some Monsters, and potentially attracting Monsters that are drawn to fire."

Torch Pods can also be used to damage Monsters with Fire Damage, heat up (and soften) the Lavasioth's armor, or burn away Effluvium in the Rotten Vale.  Can be shot at the ground to thaw icy patches formed by a Frostfang Barioth.
Source: Torch Pod piles often found in underground areas of the Ancient Forest and Wildspire Waste, and the lava areas of the Elder's Recess. Also found in many areas of the Rotten Vale and a few places in the Coral Highlands.
Capacity: 5-8-10

Bomb Pods can be used to deal moderate Damage and Stun Monsters. They can also stagger Monsters to interrupt attacks.
Source: Dropped by various Monsters and Bomb Beetles found in the Elder's Recess
Capacity: 3-4-5

Piercing Pods can be picked up and used as Slinger ammo. They can pierce their targets to inflict damage.

Piercing Pods behave much like Bowgun Pierce Ammo, and can be used to deal moderate to heavy damage. They can also stagger Monsters to interrupt attacks.
Source: Dropped by various Large Monsters and Iron Helmcrabs found in the Wildspire Waste
Capacity: 3-4-5

"Slinger Thorn Ammo sticks to the target and explodes when hit with an attack."

Thorn Pods can be used to stagger Monsters both when the Pod lands and when it is later struck by an attack. They also cause Stun buildup when attacked to the head.
Source: Dropped by various Monsters and Soldier Helmcrabs found in the Rotten Vale
Capacity: 2-3-4

Dragon Pods can be used as Slinger ammo. They deal Dragon Element Damage.

Emits a harsh, high-frequency sound that can disrupt sensitive monsters.

The sound emitted by Screamer Pods causes Monsters that burrow underground to surface and remain incapacitated for a short time. This includes the Jyuratodus, Lavasioth, Diablos, and Black Diablos. Large Monsters will become immune to the effect after several times.
Source: Crafted from Screamer Sacs harvested from Noios in the Wildspire Waste. Can also be created at the Elder Melder for 40

Flashbugs can be collected and used as Slinger Ammo. They emit a blinding flash of light upon contact.

The light emitted by Flash Pods causes Monsters to attack blindly for a short time, and knocks flying Monsters out of the air. Large Monsters will become immune to the effect after several times, and some are unaffected entirely. The effect of Flash Pods can be increased with the Blindsider Skill.
Source: Crafted from Flashbugs found in all Locales. Can also be created at the Elder Melder for 40

Dung Pods produce a stench so vile that is causes Large Monsters to flee the area.

Dung Pods can be used to avoid or escape combat with Large Monsters. The chance of a successful effect can be increased with the Dungmaster Skill.
Source: Crafted from Dung and Rolled-up Dung made by Dung Beetles. Can also be created at the Elder Melder for 40

Watermoss can be picked up and used as Slinger ammo called Puddle Pods. Try using it to trigger faraway plants and barrel bombs, or to clean mud off a target.

In addition to dealing Water Damage, Puddle Pods also break mud or slime coatings off of Monsters.
Source: Watermoss Clumps found in the Ancient Forest and Wildspire Waste, as well as few places in the Coral Highlands or dropped as mossy mud clumps
Capacity: 7-10-12

Like Scatternuts, Crystalburst can be used to stagger Monsters and interrupt attacks. It can even Stun them if it strikes the head.
Source: Underground areas of the Elder's Recess.
Capacity: 5-6-7

The Slinger can be used to launch small knives at Monsters, causing Paralysis, Poison, or Sleep  effects or serving as long-range Tranq tools. See Status Effects for more information.

Throwing Knives, Paralysis Knives, Poison Knives, and Sleep Knives are all found as pickups left behind by fleeing Gajalaka. Additionally, Knives of all kinds are found in the Supply Box on a handful of Quests. Each kind of Knife can be crafted by combining a normal Throwing Knife with a Parashroom, Toadstool, Sleep Herb, or Tranq Bomb.

Note that all Throwing Knives count as Supply Items, and will therefore be removed from a Hunter's Item Pouch upon returning from the field.

Capacity: 10 for normal Knives and 5 for Status Knives, 8 for Tranq Knives.

The Clutch Claw allows hunters to use the Slinger to attach themselves to the side of a Monster - similarly in appearance to the Switch Axe’s special Phial move. Once attached, a hunter can perform two special actions: wounding and flinch shots.

Wounding a Monster will soften its hide, causing it to take more Damage from that body part. This can be useful when a Monster has hardened body parts or when a team wants to coordinate their attacks on certain breakable parts. Instead of always causing wounds, the Long Sword, Dual Blades, Sword & Shield, Gunlance, Insect Glaive, Bow, and Light Bowgun will instead often cause a Monster to drop Slinger Ammo such as Piercing Pods.

The Flinch Shot allows a hunter to unload all their Slinger Ammo onto the Monster at once. Doing this on the head of a Monster causes it to stumble forward, which can direct it into Traps or into a wall. If the Monster stumbles into a wall, it will be knocked down and all wounded body parts will take massive damage.

Some Weapons such as the Sword & Shield, Dual Blades, Hammer, Lance and Switch Axe can also add the Clutch Claw into a combo, allowing them to follow up with a wound or Flinch Shot.

Check the Weapon Controls in the Hunter's Notes to see the controls for using the Slinger in combat. 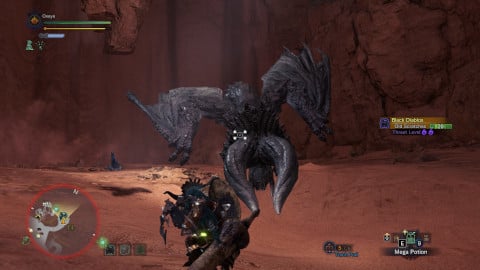 A Lance user readying the Clutch Claw against a Monster 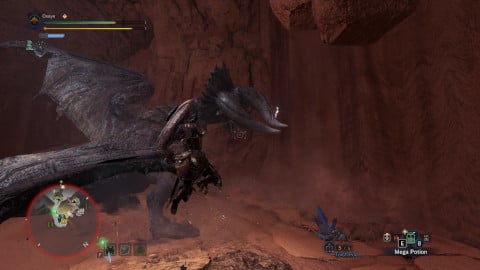 Successfully grappling onto a Monster