Everstream is a Location in Monster Hunter World (MHW). Different areas of the game have a different look and feel, map and special unique monsters that spawn within them.

Everstream (Japanese Name) is an underground area in the New World where the Research Commission will try to stop Zorah Magdaros from reaching the mysterious source of power. It's a gigantic cave connected to the ocean with molten lava covering its walls and enormous stalactites awaiting to fall. That is where the Research Commission built the Great Barrier and brought the Dragonslayer to put an end to Zorah's journey.

The Monsters that inhabit the Everstream are:

You will find the following Items & Materials for harvesting in this area:

You will find the following Hazards:

Screenshots and images of this area, as well as location videos go here. 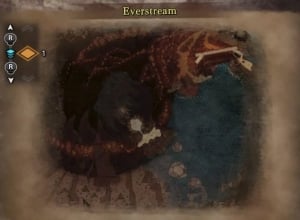