Contract: Woodland Spirit is an Event Quests in Monster Hunter World (MHW). Optional quests are repeatable and unlocked after completing specific points in the main story via Assignments.

A portal appeared in the Ancient Forest, and a strange creature came through it. The beast is called a woodland spirit and it's extremely dangerous. Quest level close to Death March! difficulty in The Witcher 3. Client - Commander.

This quest’s difficulty will be on par with Extreme Behemoth. While it is possible to solo, Ancient Leshen’s large health pool and summoning mechanics will make it extremely difficult. Gather some friends or find a lobby that is hosting this quest to easily find other players as SOS were little to none during the time I attempted.

Upon arrival quickly open your map and fly to Camp 11 in the Northeast as the Ancient Leshen starts in Quadrant 12. Pick up the Redpit slinger thats on the slope near camp. Jump across the gap, swing from the vine, and head down the root to be outside of the Leshen’s first area. Hopefully, one member of the team have wide range to share their buffs with the whole team. These buffs include:

Enter Quadrant 12 by crawling under the tree vine and have 1 member turn left, look up and shoot down the boulder onto of the Leshen. Doing this deals 3375 damage to the Leshen and 480 to the surrounding Jagras. Another member should run up to the Leshen and drop their Health Booster. Other team members should dawn their Temporal Mantle and go to town. Temporal Mantle will negate heavy damage but the chip damage taken from the Leshen’s crow aura will bypass it thus needing the Health Booster on the ground to counter it. I usually refrain from popping my Temporal until a minute goes by so not all Temporal Mantles will be on cool down at the same time.

The Leshen fights similarly as the one everyone had to fight in Contract: Trouble in the Ancient Forest. His primary attacking are summoning roots to attack the player. The offensive version will travel in a linear V-shaped path while the defensive version will summon a wall of roots around the Leshen which will spread outward 3 times.If players get too close he will swing his arms punching the player away. He also have a root attack that will come up from the ground at the feet of a random player. This attack has a long range on where it can spawn and it has a moderate range from which it extends to. He can send out his murder of crows to attack the player in succession.

The deadly attack to watch out for is a CC type move from the Leshen which he will imprison a player with roots. The crows will deal damage over time as well as the Leshen may attack the player or summon his pack of Jagras until the Leshen will shoot a bursting root at the player. This attack is lethal as a 200 HP character with good defense will barely survive it let alone if they were already weak or was attack by other beings once caught. Luckily your teammates can save you if you are caught. Use the hunter Runestone or Igni to set the roots aflame. Alternatively, players may also flash the Leshen which will break the hold.

The Leshen likes to teleport around the area, so using the slinger and shooting him will stagger him at times allowing your teammates to continue their onslaught. There are scatternuts, redpits, puddle pods, and the Leshen will drop dragon and piercing pods that all can be used.

When the Ancient Leshen summons his Jagras pack make sure to eliminate them as quick as possible. These Jagras are tanky and are highly annoying due to the vast number of them while the Leshen will enclose players in a root prison while distracted. Players that have long weapons like a longsword should focus them down to allow the other teammates to focus on the Ancient Leshen. If overrun use flash pods to temporarily stun the Leshen and all the Jagras.

At times the Ancient Leshen will cause a large rumble and explode scattering tons of crows throughout the map. This attack hits very hard so it’s not wise to try to tank it. This attack is similar to Teostra’s fire AOE which they charge up then explodes. A flash pod will be able to counter this attack or simply use your superman dive to safely avoid it. This attack may occur up to 4 times during this quest.

The Leshen has 2 different paths he may take during this quest. 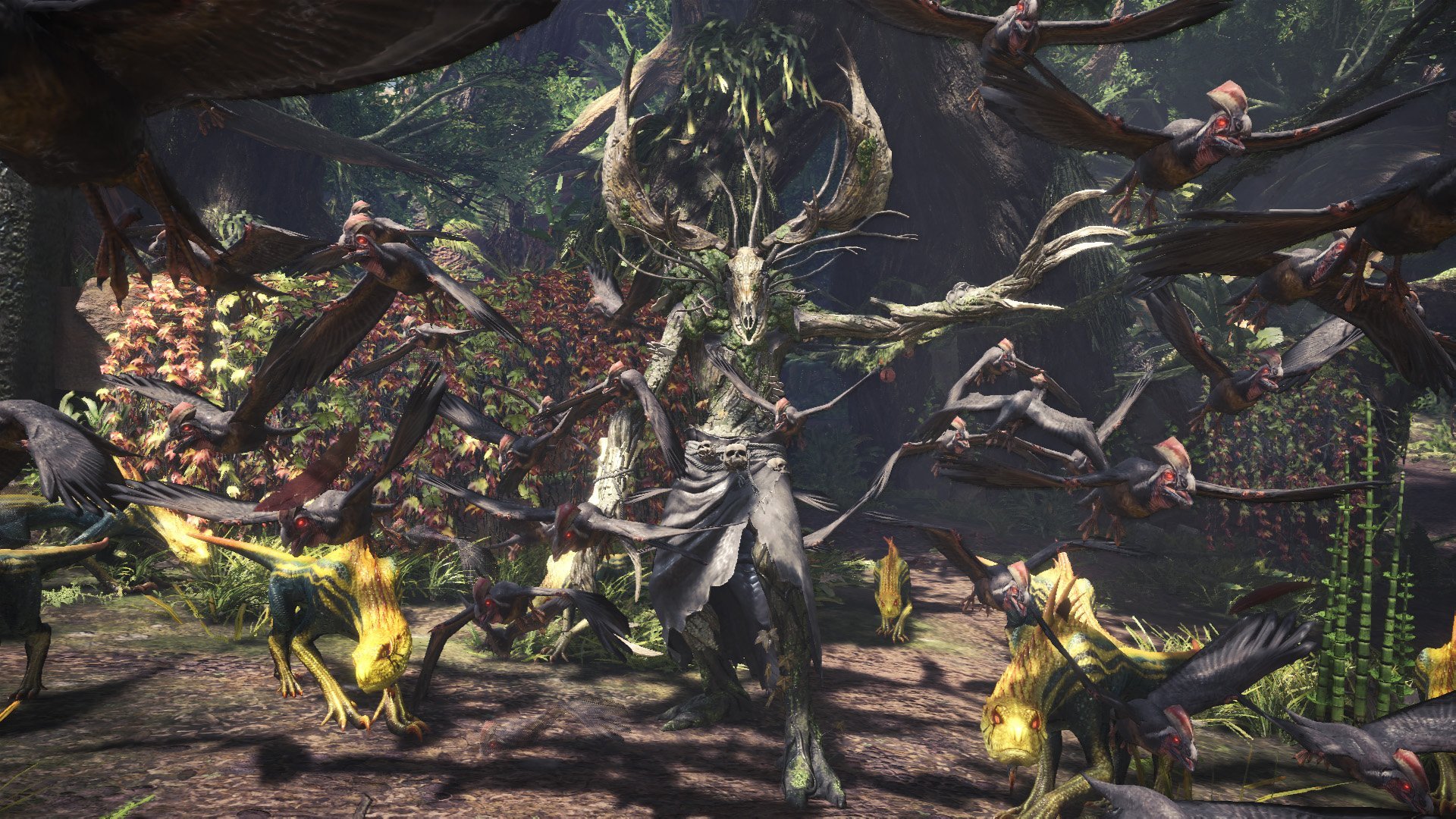